Gratitude to Security officers’ actions that saved a life

Security officers and engineers are essential workers, but not everyone sees them as such. So, we’re joining forces with others within the security industry to help the public recognise and appreciate the skills and commitment of the men and women who run to the scene, not from it.

Security officers don’t have the option of working from home, their job demands that they go where they are needed to protect people and property. However, a recent survey revealed how few people considered security officers to be essential workers – here is a true story that we hope will help change that perception.

It seemed an ordinary day for our officers Denzil Wathen, Tara Herbert and Securitas shift supervisor David Francis, providing security and front of house services at the UK’s largest munitions factory. These duties include authorising access, mobile and foot patrols, speed checks and vehicle searches, and monitoring of the CCTV cameras. Towards the end of the shift, the team received a call alerting them to a road traffic accident on site. Denzil hurried to the scene where he saw evidence that a serious injury had been sustained, although the casualty was nowhere to be seen.

Denzil reported the severity of the situation to Tara and Dave and then began a search to locate the missing casualty whom he found in a nearby canteen. It was clear that his injuries were extensive and life threatening. It was a harrowing situation, but Denzil immediately began applying pressure to reduce the casualty’s blood loss while also keeping his airways open. (All our security officers learn First Aid skills as part of their training). Struggling to maintain communication with his colleagues whilst providing this critical assistance, he called for back-up. Leaving Tara in charge of the control room, Dave quickly joined Denzil and took over radio communication, delivering minute-by-minute updates to Tara who relayed them to the paramedic team that was on its way.

For 40 minutes, Denzil continued to deliver lifesaving treatment until the paramedics arrived and ventilated the patient before rushing him to hospital.

After a lengthy hospital stay the casualty made a full recovery, but there is no doubt that if it wasn’t for Denzil’s actions and the support of his team in guiding the paramedics to the scene, the outcome would have been very different.
Denzil, Tara and Dave would say that they were “just doing their job.” And that’s really what we want to highlight: when security officers go to work there is always a risk that they might find themselves in a difficult or distressing situation. They know this, but still they continue to play their often unseen part in keeping the public safe, and for that they deserve our gratitude. 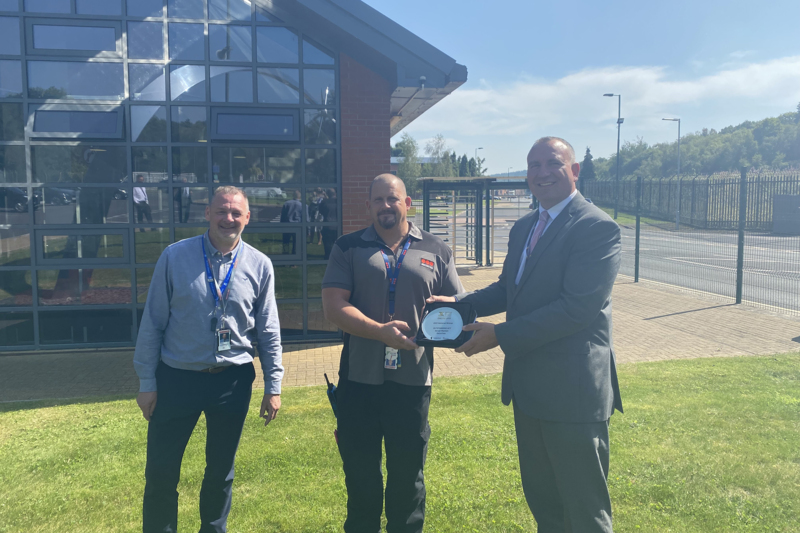 Shining a light on the ‘hidden workforce’

What do the public really think of security officers?

The only security company taking part in the Gratitude art installation.

We are very proud that one of our colleagues has received this prestigious award.