Securitas’ Purpose is to help make the world a safer place so we are very proud that one of our colleagues has received a prestigious award for doing just that. Denzil Wathen was named the Outstanding Act of the year at the 2021 British Security Awards.

The event that prompted Denzil’s nomination for the award happened whilst he was on duty as a security officer at BAE Systems Glascoed site and, as a result of an on-site incident, someone sustained serious injuries. Putting his training into action, Denzil went above and beyond to ensure the casualty received lifesaving first aid until the emergency services arrived, while also making sure that the site remained protected and communication remained throughout. Thanks to Denzil’s prompt reaction and care, the casualty went on to make a full recovery.

For his exceptional service during the incident, Denzil received an award in the Outstanding Act category at the 2021 British Security Awards.​ Organised by the British Security Industry Association (BSIA) and judged by an independent panel, these awards celebrate the achievements and acts of bravery by members of the UK’s security industry. "Choosing the finalists was not an easy task," comments Mike Reddington, Chief Executive of BSIA, "the nominations show the wealth of talent, innovation and best practice on display in both our membership and the wider industry."

"We are so thrilled that Denzil has received this recognition." says Shaun Kennedy, Country President, Securitas UK. "It’s a reminder that everyday heroes exist within Securitas UK. Day and night, our security officers provide a reassuring professional presence – something that has been particularly important throughout the past 18 months as we’ve all had to deal with the challenges of the global pandemic. Denzil has proved that when something happens, our security officers can be relied upon to act quickly and calmly." 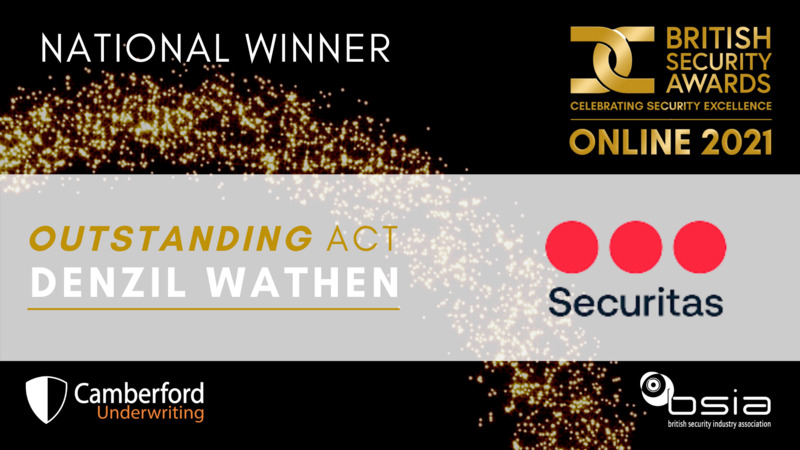