Seeing – and supporting – a different world

Across the world, Securitas people work hard to make the world a safer place. For many of our colleagues, this is not just part of the job description but an ethos that they apply outside the workplace too.

Ashfak Ahmed, Finance Manager at Securitas UK, is a fine example of this. In December 2019, he and two friends Adil Parkar and Abdul Roghey, responded to a request from a community outreach project (run by As-Suffa), for help at a Birmingham shelter. “We visited the shelter and were horrified to hear that people were freezing to death on our streets,” says Ashfak. “At the beginning of 2020, myself and four colleagues in the finance team  (Sarfraaz Khalfey, Sanjay Khangura, Mohammed Ahmed and Safraaz  Mukadam) along with others from the local mosque committed to manning the shelter from 8pm – 8am, every Saturday and Sunday night between January and March, the coldest months of the year.” The shelter provides a safe, secure and warm environment, providing hot food and drink before the lights go out. It is not just for the homeless, it  also supports people in hostels or those living in difficult circumstances.

With milder spring weather, the need for overnight shelter receded but Ashfak identified another mission. “There was a gap in the funding and provision of free hot meals on Saturday nights,” he explains, “So, we approached our community and I set up a Just Giving page. People were very generous.” As well as organising the funding, Ashfak – along with his wife and a dozen or so volunteers from their 70+ team – continue to spend Saturday evenings distributing hot meals, drinks and food bank items to over 100 people, including residents at two local women’s refuges. “We are very lucky to work with a catering company who part-subsidise the costs,” notes Ashfak. 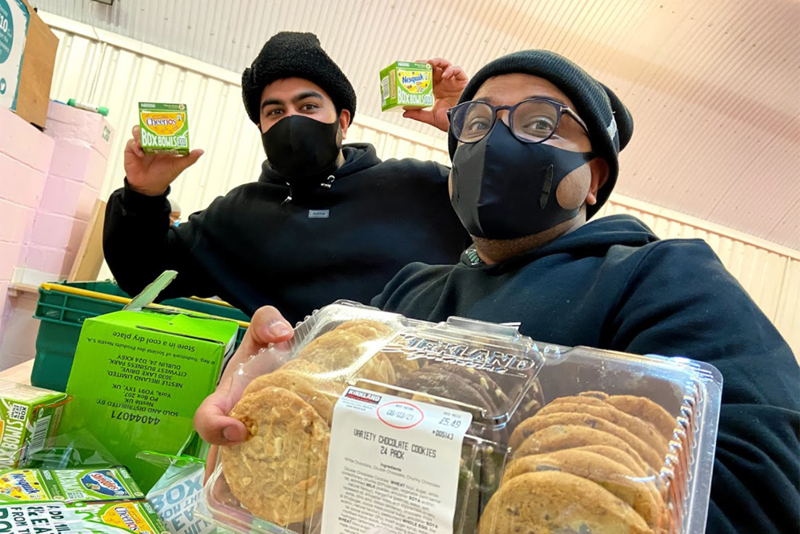 One in five people in the West Midlands live below the poverty line, and for many of them, the pandemic made life even harder. So, when the country entered lockdown in March 2020, Ashfak and his army of volunteers stepped up to help the wider community by getting involved with setting up a food bank. “We contacted Birmingham Council, which was co-ordinating the distribution of food parcels. Several times a week, we would collect bulk quantities of foodstuffs, create individual food parcels and then, working from the council’s list, co-ordinate local volunteers to deliver it.”  Ashfak’s spreadsheet skills came in handy for managing all this activity which, at the peak, saw them delivering nearly 100 parcels in one day. Post-lockdown, they continue to distribute food parcels from the shelter to anyone in need. "It is not just about the food, but also in knowing that there are people who care and will give you a listening ear, or a friendly smile", add Ashfak.

In January 2021, Ashfak and his fellow volunteers undertook to increase the provision of hot meals from one night a week to two, but this meant  generating double the funding. Shaun Kennedy, Country President and Managing Director for Securitas UK, heard about what Ashfak and his colleagues were doing and asked how much it would cost to fund it for a year. “I told Shaun it was a substantial sum,” says Ashfak, “so we were absolutely thrilled when he said Securitas would donate the full amount.  We’re so grateful as it means we can plan with certainty for months to come.”

“Securitas understands the importance of community and collaboration, so we were delighted to help fund this worthwhile cause” says Shaun. “As a company, one of our core values is helpfulness, which we define as going above and beyond and being there, no matter what. The dedication and achievements of Ashfak and his fellow volunteers really epitomise this.”

Earlier this year, Ashfak’s tireless work to help the less fortunate in his local community was recognised with a well-deserved Securitas Community Award. “I’m very proud to receive it,” he says, “but the award is really for everyone who has been – and continues to be – involved in this outreach effort.”